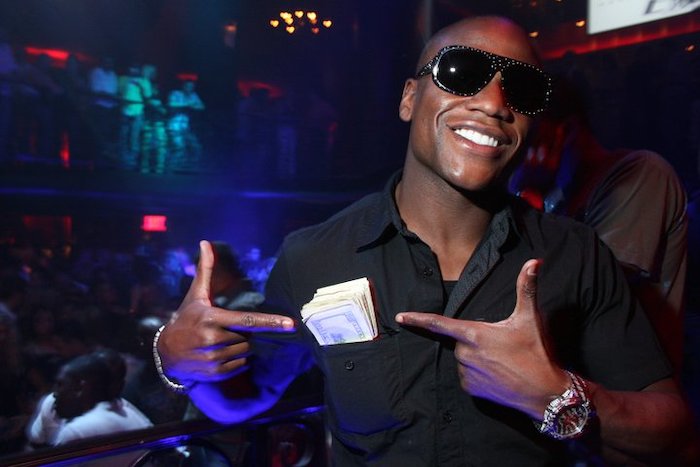 Average Boxer Salary: How Much Do Boxers Make?

According to ‘IBIS World’ boxing promoters made up to $361.5 million in 2019 (1). If promoters made that much boxing money, it’s safe to assume boxers are also rolling in dough. In reality, it’s a mixed bag, with some boxers making millions, while others don’t even have enough to pay their bills.

How is that possible?

We’ll answer that by looking into how much boxers make and which type of boxers bring in the most money.

Boxing Salary (How Much Money Do Boxers Make as a Salary?)

If you break into professional boxing, the annual professional average boxers salary isn’t much better unless you are a big name. According to the U.S. Bureau of Labor Statistics, the median salary of professional boxers was $51,370 in 2017. More than half of professional fighters don’t earn that much per year, and 10% of them make under $19,220 annually (2).

So, who’s getting the millions?

How Much Do Boxers Get Paid Per Fight?

Boxers like Floyd Mayweather, who earn millions of dollars per fight, make up less than 1% of professional boxers. For most fighters, the amount received per fight is quite depressing.

How much do beginner fighters make?

According to Expert Boxing (3):

Considering you can participate in only a few fights a year without destroying your body, that’s not enough to sustain an amateur boxer.

The average professional boxer is only a little bit better off. If you are lucky, you could earn between $500 and $2000 per fight for your first ten fights. Once you have a name and people see you as a pro, you can earn about $2000 to $2500 per fight.

For those who are extra lucky and get an invitation to partake in regional or national title matches, there could be a $10,000 to $50,000 check. The few who get a world title shot receive $150,000 or more. But understand that world title fights occur only once or twice a year, and only a handful of fighters get such opportunities.

Also, don’t forget many boxers personally pay for their trainers, health bills, licensing, food, and more. After taking such expenses out of the $2000 or $2500 the average pro boxer earns per fight, there isn’t much left.

Now that you have an answer to, “how much do pro boxers make?” let’s take a look at how pro boxers supplement their income.

What Other Ways Do Boxers Make Money?

Money Inc lists George Foreman as one of the two richest boxers of all time (4). Most of his wealth isn’t from boxing; instead, it’s from merchandise sales, specifically the George Foreman Grill.

Let’s take a look at this and other ways professional boxers earn a living.

Big-name fighters compete about once or twice a year. Other professional boxers give as many as seven fights a year.

For each outing, a boxer gets a piece from the fight purse. The purse is money the promoter pools into a match, and both boxers get to split the purse. The boxer with the bigger name gets a bigger piece of the purse.

Fighters then have to pay taxes, training fees (10%), management fees (10% to 35%), and more out of their cut. After all the deductions, what’s left could be less than half of a boxer’s cut from the fight purse.

Endorsements or sponsorships are brands paying celebrities to advertise their products. It’s a marketing tactic that assumes consumers want the products they see their favorite athletes and celebrities using.

An endorsement is when brands capitalize on a boxer’s fame to sell products. On the other hand, merchandising is boxers capitalizing on their own fame to sell their own products. A good example is the George Foreman grill, which we mentioned earlier.

The Highest Paid Boxers in History

In 2017, he got $275 million for fighting Conor McGregor and retired with a remarkable undefeated record of fifty wins to zero losses.

George Foreman’s reign as a U.S. professional boxer lasted from 1969 to 1977. In 1987, he made a comeback that lasted until 1997. His biggest successes as a boxer are winning an Olympic Gold Medal and getting the World heavyweight champion twice.

These days Foreman is no doubt more focused on his email address than the action inside the ring. He’s dabbled in everything from writing and acting to advertising. And let’s not forget the world-famous George Foreman Grill. His net worth currently sits at an estimated $300 million.

Oscar De La Hoya is a skillful boxer who impressed in the ring until his retirement in 2009. Of the 45 professional fights he ever fought, he won 39. He also won several accolades, such as a gold medal in the Olympics lightweight division. He’s now a boxing promoter with a net worth of $200 million.

Pacquiao is one of the few boxers to come out of the Philippines and take the world by storm. He became a pro boxer at the young age of 16 and went on to win 57 of his 65 fights. Thirty-eight of those fights were K.O.s.

Other significant accomplishments of Pacquiao: the belts he won across seven different weight classes. Now, Manny Pacquiao’s net worth stands at over $190 million.

Are Any Boxers Currently Making As Much Money?

In 2019, Canelo Álvarez earned an estimated $100 million after his huge clash with Gennady Golovkin while Anthony Joshua and Deontay Wilder earned $70 million and $35 million, respectively (5). Note that these boxers are still in their prime, and we expect them to keep boxing for several more years.

According to Fox Business, here are the highest-paid boxing matches ever (6).

The Mayweather vs. McGregor clash was an amazing contest between a professional boxer and a professional mixed martial artist. The match took place on August 26, 2017, and Mayweather emerged with a $275 million check. Even though he lost, McGregor walked away after doing MMA fighters around the globe proud and, of course, with a sizeable $85 million check in his pocket.

There were around 4.3 million pay-per-view (PPV) buys for the fight, making it one of the most valuable PPV fights in history.

On May 2, 2015, two of the decade’s greatest fighters faced off to see who would win the Welterweight Unification Championship. The matchup was billed as the “Fight of the Century,” and Mayweather got a massive $250 million check. Pacquiao’s $150 million check was smaller but still significant.

It also set a PPV record with 4.6 million buys.

On September 14, 2013, Mayweather proved himself to be the superior fighter by retaining his undefeated title and ending Alvarez’s undefeated streak. Even though Alvarez lost, he got a $12 million check, while Mayweather walked away with $80 million.

With four of the fights on this list having Mayweather’s name on it, and him winning all four, it’s clear why he is the richest boxer ever. On May 5, 2007, he beat De la Hoya to win the WBC Super Welterweight World Championship.

Even though he lost, De la Hoya got the bigger check of $52 million, while Mayweather received $25 million.

The Holyfield vs. Tyson rematch of 1997 is one of the most memorable showdowns ever, not because of the skill or cunning of the fighters, but because of Tyson biting off a piece of Holyfield’s ear in the third round.

Even though the bout came to an abrupt and unsatisfying end, it still generated a revenue of $180,000,000 from PPV and other avenues.

Before you decide to be a professional boxer, remember it’s a brutal sport on the body, and the chances of making it big are limited. Nevertheless, if you have the talent and make the sacrifices, you could be the next big money surprise.

After all, that’s exactly what happened to Andy Ruiz when he TKO’d Anthony Joshua on June 1, 2019.