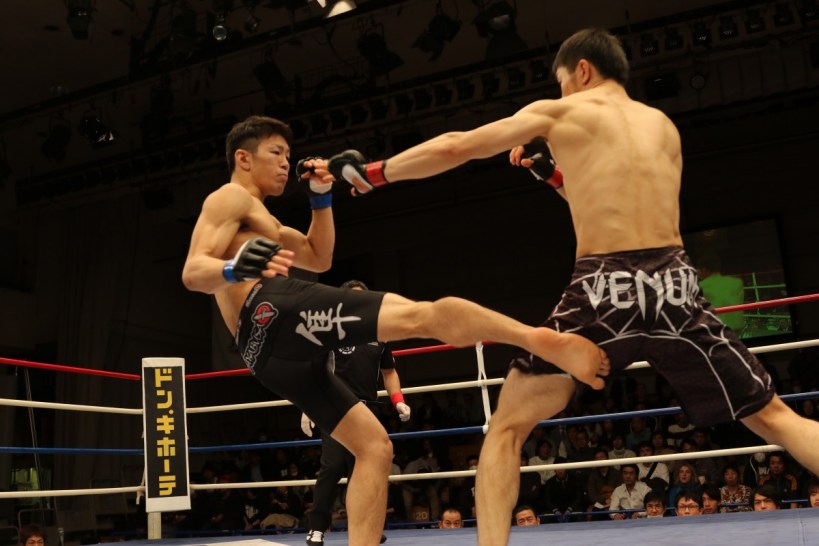 Muay Thai vs BJJ – Which one is more effective?

Both Muay Thai and Brazilian Jiu-Jitsu (BJJ) have an important role in mixed martial arts. For this reason, more and more people are learning these two arts and comparing them. A lot of people often have the question “what is the most effective martial art?“. The truth is that both Muay-Thai and BJJ, like all martial arts, are vastly different; muay-thai is an effective stand-up art while BJJ is one of the most dominant grappling arts.

Because they are so different, the answer to which is more effective depends largely on the context. If you are interested in learning a combat sport, you should read up on the differences between Muay Thai vs BJJ. This article will tell you the best for a street fight, the easiest one to learn, and the best one for getting in shape.

Muay Thai – in a nutshell

Muay Thai roughly translates to Thai Boxing, but it is not at all the same as traditional boxing. Muay Thai uses punches, knees, elbows, and kicks to weaponize the entire body. According to Evolve MMA, the range of available striking options makes Muay Thai “effective in all ranges of standup fighting unlike most other striking based martial arts.” (1)

The art is hundreds of years old, and historians believe it began with Thai warriors in battle. It first came to the West during the Second World War; now people of all ages and all backgrounds train in Muay Thai for competition and fitness.

In sport, Muay Thai involves several rounds and the use of padded gloves. It uses every part of the body aside from the head. While boxing has two points of contact and kickboxing has four, Muay Thai has eight. The two classifications of Muay Thai technique include lukmai, or minor technique, and maemai, the major technique (2).

BJJ – in a nutshell

BJJ evolved in Brazil in the 1920s. It is a grappling-oriented art with Japanese origins. The martial art became popular in the West when Royce Gracie used it to become the first champion of the Ultimate Fighting Championship (3). This is one of the reasons for the sport’s major boom in popularity in the 1990s.

BJJ fighters win when they force their opponent to submit. The two fighters grapple with each other for dominant positions using their knowledge of the workings of the human body. BJJ bouts are ten minutes long, and the main ways to get points in BJJ are:

Classic BJJ fighters wear fitted kimonos with various patches to represent their school and their sponsors. Additionally, the combat style promotes the idea that smaller fighters can leverage techniques to take down bigger, stronger attackers. Today, the art is a key part of any MMA fighter’s repertoire.

Muai Thai vs BJJ: Is One Better Than the Other?

Fans of both sports have respective arguments for why one is better than the other. The truth is, they both have their advantages in different situations. Muay Thai is extremely effective while a fighter is on their feet, and almost every fight begins standing up.

Against other fighting styles, such as boxing, Muay Thai fighters have the advantage of creating distance and throwing kicks. If a Muay Thai fighter throws kicks against a BJJ fighter, they risk giving their opponent the chance to take them down. In the UFC, BJJ specialists who have some striking ability generally do well.

Muay Thai vs BJJ in a Street Fight

These two fighting styles are equivalent when it comes to a street fight. With Jiu Jitsu, you can take a bigger opponent and control them from the ground. However, Muay Thai is more useful off the bat since these fighters have the power while standing up.

In a street fight, most people revert to punches first. A Muay Thai fighter can defend against these attacks effectively, knowing exactly which parts of the body to strike. A BJJ fighter can easily take an untrained opponent to the ground, where they won’t know how to escape.

Against someone not trained in any fighting styles, both skills will prove useful. There is a long list of BJJ submissions, but Muay Thai has nearly infinite combos of movements and strikes. According to Fiji Muay Thai, “BJJ is more focused on sport competition within set rules that do not include striking.” (4)

Because BJJ is not focused on striking, it may give you less of an advantage in a street fight. In UFC fighting, fights end with knockouts more often than submissions, so it’s possible that that effective striking has the advantage in MMA.

Which is the Easiest to Learn?

The option for which one you learn depends on your goals. If you want to compete in MMA, it would be helpful to know both. Although you would still want to spend time learning the following:

One main factor for ease of learning is the availability of a gym or trainer. If you don’t have a BJJ or Muay Thai gym in your area, it will be hard to get the skills and practice necessary to become well-trained. If you can access good instruction in both, Muay Thai may be the easiest option.

It takes about 10 years to get a black belt in BJJ. There are certain strategies and techniques that can take a long time to perfect, such as the “worm guard.” Not only do you need to understand the techniques, but you need to be able to effectively use them to fight.

For Muay Thai, you have to learn relatively simple techniques using each of the body’s eight limbs. While the skills are simple enough to learn, it takes a lot of practice to use them in fighting. Some aspects of Muay Thai, such as clinching, can take years to perfect. So, you may be able to quickly pick up on the Muay Thai strikes, but that won’t automatically make you capable of winning a match.

Which One Can You Learn Without A Gym?

Muay Thai might also be the easiest to learn from home if you don’t have access to any gyms. You can find paid and free instructional videos, books, and guides to teach yourself. It also helps if you have a heavy bag to practice on.

For BJJ, there is little that substitutes for a training partner. It is hard to truly learn the different grappling positions and holds if you only have a weighted bag or lifeless dummy. However, it is not impossible.

There are many online resources for learning Jiu Jitsu at home, though it helps if you can gather some friends to help you practice. The online trainings usually focus on learning the reflexes necessary for good self-defense.

Learning at home can be a good place to start if you want to get an understanding of these different arts. However, if you want to participate competitively, in-person training is the way to go. Only a knowledgeable trainer can correct you if you are doing something wrong and help keep you safe.

Naturally, neither of these martial arts are easy. While BJJ may be harder to learn, they both take long hours of practice and dedication. Be prepared to work hard and toughen your body up if you want to be good at one or both of these sports.

Martial arts are a great way to stay fit. If you have a good trainer, you will feel your body becoming stronger after every practice. Both of these martial arts will test your limits mentally and physically.
BJJ tends to focus more on strength and muscular endurance. After a long roll session, you will feel exhausted. Muay Thai training focuses on:

With Muay Thai, you use your entire body when you strike, effectively engaging all your muscles during one session. BJJ training requires a little less emphasis on cardio. However, either sport helps you stay fit if you train regularly.

The perk to using Muay Thai is that you can train by yourself when you need to. All you need is a bag, and you can practice your strikes using different Muay Thai heavy bag workouts. The MMA Guru states that: “not only can you improve technique and strength, training on a heavy bag is also a good cardio workout.” (5)

The ability to work out without others means that you won’t have to rely on your local gym to stay fit. Once you learn some techniques and combinations, a heavy bag workout can help you:

In summary, there is no better option when it comes to fitness. It all depends on you and your dedication.

The Bottom line: Muay Thai vs BJJ – Which One to Learn First?

The two martial arts are so different that it hardly matters which one you learn first. You should go with the one that appeals the most to your style. Would you rather spend more time striking or grappling?

Different trainers will give you different advice for learning multiple fighting styles. If you want to become an MMA fighter, some experts say you should learn both arts at the same time. This way, you get knowledge of groundwork and striking in case a fight goes in either direction.

However, this approach may require more time and mental capacity than you have. Another approach is to just pick the one you want to use as your base and learn that first. Many professional fighters begin in one domain and gradually branch out into others.

Both of these arts have you covered whether you are looking for self-defense, self-discipline, or fitness. If you can’t decide, check out the gyms and coaches available in your area. Maybe one will sand out to your more than the others.

You can’t go wrong with either Muay Thai or BJJ. If you can, attempt to learn both to become a truly well-rounded martial artist. With so many resources online, you can find training in both of these arts even if there are no local teachers.

The best way to choose which one to learn, if you must decide, is to:

Overall, comparing the two is much like looking at apples and oranges. Most will ask at some point or another ‘what is the most effective martial art?’. The simple answer is that learning any martial art will help you live a more active life and expand your knowledge and self-awareness – we hope you find one that suits you!