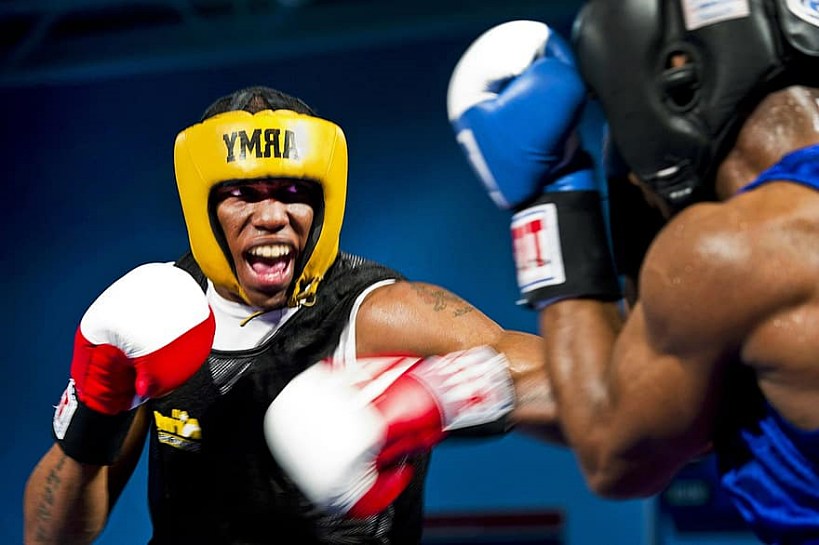 MMA vs Boxing – Which One is More Effective?

MMA fighting and boxing are both popular combat sports in the United States. You might be wondering how they compare while looking to weigh up their pros and cons. If you are interested in learning a combat sport, both of these are great options for learning to fight not only for sport, but also in real-world situations.

However, there are key differences between the two sports that may help you choose which one to learn. Both styles can be effective for self-defense, training, and fitness, but there are also some unique qualities of each that are worth pointing out.

MMA is an abbreviation for mixed martial arts (1). It is a combat sport where competitors attempt to dominate each other using finishing holds, control, and striking. In MMA fighting, fighters can use:

To win an MMA fight, a fighter can knock out their opponent, get the opponent to submit, or have the referee stop the match. MMA can describe any style of martial arts that uses techniques and theories from several different martial arts. MMA is known for having few rules, although modern fights have more rules than old-school MMA fights. It’s also an ongoing debate as to which style of fighting is the best martial arts.

MMA fights typically take place in a closed-off cage, a boxing ring, or a matted area for amateur fights. The sport hit popularity in 1993, when the USA invented the Ultimate Fighting Championship. According to RulesofSport.com, “pitting fighters of different martial arts styles against each other, it was a TV hit and began to popularize the sport of MMA across the world.” (2)

MMA has no one governing body, and there are many different federations and associations around the world. However, many commissions in the USA follow the Unified Rules of Mixed Martial Arts. The most skilled MMA fighters cross-train in different disciplines to become skilled all around.

In MMA, there are 10 weight classes for fighters. They use no equipment except for light, padded gloves to protect their hands. Three judges score each round. If the match lasts the entire time, the judges’ scorecards determine the winner.

Boxing is a combat sport, as well as a well-known fitness trend. Many people know the name of at least one famous boxer. According to Study.com, boxing became an official Olympic event in 688 B.C. (3). When boxing came to the USA, it was illegal in many states because people associated it with corruption and gambling.

The sport peaked when the matches began being broadcast on radio and TV. Boxing peaked in the 1960s and 80s with the rise of Muhammad Ali and cultural landmarks, like the movie Rocky. Modern boxing, whether amateur or professional, involves two opponents trying to knock each other out for up to twelve, three-minute rounds.

Some of the rules of boxing include:

The moves of boxing fall into three categories: punches, stances, and defense (4).

MMA fighting has slowly become more popular than boxing in the mainstream media. However, boxing is a traditional sport that will not be going anywhere any time soon.

One important difference lies in the audience. MMA audiences may enjoy certain aspects of fighting that don’t appeal to boxing audiences. Additionally, the pop culture surrounding boxing has created a certain reverence for the sport among US audiences. Many MMA matches play into aggressiveness and brutality for entertainment value.

There are several major differences in the two sports that you can break down into the following categories.

Boxing gear depends on the level of the fighter. More often than not, boxers only have boxing shorts, shoes, mouthguards, and gloves. Some amateur boxers may use padded helmets for fighting or for practice. While training, boxers use speed bags and heavy bags when they’re not sparring.

MMA is a full contact sport, so they don’t use gear during fights. Their gloves are a lot smaller and more flexible than Boxing gloves. The best way to prepare for an MMA fight is to spar, although there are some other training methods.

The two sports have extremely different rules. MMA fighters can use any body part to injure their opponent, with very few strikes off limits. The sport tends to feature intensive grappling. Some MMA fights can quickly become full blown wrestling matches.

In boxing, the fighters must remain upright and they have limited acceptable strikes. Boxers can show off their technical expertise in most fights, while an MMA fighter may not get to use even half of their arsenal in a single match. Additionally, clinching is much more acceptable in MMA than in boxing.

The rounds also differ. While boxing has a certain number of three-minute rounds, MMA fights have either three or five five-minute rounds.

Finally, MMA fighting often results in more open wounds, broken bones, and blood. While both sports are dangerous, MMA takes a serious toll on the fighters’ bodies. However, according to The Fighting Report, “the rules of Boxing allow fighters to sustain serious injuries like concussions and permanent brain trauma. These injuries are less visible but can be far more serious than a bloody nose or broken arm.” (5)

Most MMA terminology is foreign to people solely trained in boxing. For example, these terms do not exist in boxing:

Since boxing is limited to the upper body, fighters have fewer angles they need to keep track of. A boxer needs to angle their body to minimize their target area while still being able to deliver blows with the most impact. Boxers need to be able to react quickly to take advantage of different angles.

MMA fighters are open to different levels of attack. They have to understand how to block and execute a larger number of attacks than a boxer. Because of this, they have to keep their hands lower and protect their entire body.

MMA vs Boxing – Most Effective for Street Fighting

In a street fight with no rules, an MMA fighter would most likely win, depending on a few factors. An MMA fighter can employ tactics such as kicks, elbow and knee strikes, and takedowns. Boxers have little experience in this area, having only punching and dodging in their arsenal.

A boxer can employ an aggressive strategy, such as knocking their opponent out before they have a chance to fight, and win that way. However, an MMA fighter can avoid this outcome with a more varied approach.

Based on historical MMA vs Boxing fights, the MMA fighter’s path to victory includes:

However, a boxer can still win if they strategize well. Boxers tend to have stronger punches and better hand speed. If they land some good punches, they can avoid being taken down by the MMA fighter. Boxers also have better footwork. They move in and out to create angles for strong attacks.

Unfortunately, the boxer will be out of luck if the MMA fighter takes the fight to the ground. The boxer’s main strategy would be to keep the fight upright and to stay out of takedown and kicking range.

Which is Easiest to Learn?

There is no easy option when it comes to combat sports. All of them take serious training and will take a toll on your body. If you put effort into learning the technique, you can benefit from learning either of these arts.

However, MMA covers a lot more territory than boxing. You will have to learn standup techniques as well as ground techniques and use every part of your body. Since you only need one form of attack with boxing, MMA generally takes more time to learn.

In boxing, you will learn footwork, bobbing and weaving, and how to use your hands. If you are trying to learn a combat sport quickly, boxing is your best bet.

Which is Best for Fitness?

Both sports are good for:

Choose a gym or trainer where you will get a mix of conditioning, skill, and technique training. Boxers tend to have great stamina, as they have to last for ten to 12 rounds. MMA fighters fight in shorter bursts, but they use their entire body and deal with their opponent’s full weight.

When you train in either of these sports, you will no doubt become fitter and fitter with each practice. However, if fitness is your only focus, then you may not need to train for combat at all. You can enroll in a cardio kickboxing class or other session dedicated just to working out.

In fitness-focused classes, you will not get the skills and technique you need to fight well. However, you can still lose weight and build your overall strength, if that’s your main focus.

Which One Should You Learn First?

If you are planning to learn both, you can’t go wrong with the order in which you learn them. With MMA, you will learn multiple martial arts such as Muay Thai and jiu-jitsu. However, you can apply some of the skills you learn in boxing to MMA fighting.

Related: Muay Thai vs MMA : which is more effective?

Boxing teaches you some key footwork and head movement techniques. Some MMA fighters study boxing technique to further improve their skills. The learning doesn’t necessarily work in reverse, as you can apply few MMA skills to boxing.

If you want to choose one to focus on, choose the fighting style that appeals to you. Do you prefer to focus on punching or would you like to add kicks and takedowns? You can’t go wrong with either choice.

Your goal also matters. If you want to be a professional MMA fighter or have a career in martial arts, then you want to focus on learning MMA. MMA will also help you become a well-rounded fighter able to dominate more than one area.

Regardless, it’s never too late to learn one or more martial arts. The best way to find out which is best for you is to get started. To become the best fighter possible, study as many of the best martial arts as you can.