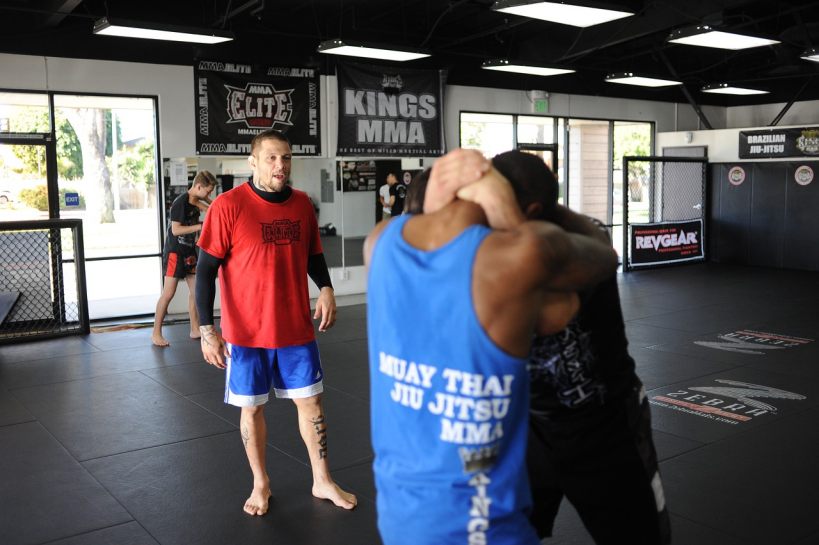 Looking to get your best foot forward and dive into a new obsession with martial arts? Brazilian jiu-jitsu is fast-becoming the go-to martial art for those who are looking to find a fun, versatile, and rewarding experience to slot into their weekly lives.

BJJ is all about the journey and with that in mind, through this guide, we’re going to take you through some the greatest jiu-jitsu academies on the planet. Though BJJ can be learned in most cities these days, if you are truly serious about making progress within the sport, learning from the elite of the elite at a top-class jiu-jitsu academy is a perfect combination.

Pricings will, of course, vary based on your requirements and the level of training you pursue, but all in all, a good idea of what you should expect week-by-week can be achieved through some quick research.

To make things easier for you in your pursuit of the best BJJ training available, we’ve compiled this guide in order to truly give you an idea of what to expect when you’re attempting to take that first step and learn BJJ.

Related: Everything You Need To Know About Khabib Nurmagomedov

Brazilian Jiu-Jitsu Gyms Near Me

Chances are that if you’re living in a major city, you are within close proximity to a number of martial arts gyms – leaving you one quick Google search away from getting some grasp of what your options are.

The real question a lot of you will have is ‘are there any elite level schools of Brazilian jiu-jitsu near me – training that is overseen by reputable instructors and world champion coaches that can offer insight into this diverse and ever-evolving sport? In short, chances are that you’ll be within range of a fantastic place to learn BJJ – especially if you’re living in places like the United States, Brazil, or Canada.

If you are hoping to take a dive into the world of BJJ, keeping a BJJ training journal can be an excellent way to maintain a healthy pressure on yourself week-to-week.

Despite the sport originating in Brazil, it has quickly expanded to fill every corner of the earth! With that out of the way, we hope you enjoy our detailed guide to the best jiu-jitsu schools (1).

Located in the heart of New York City, this esteemed academy offers training in muay thai, wrestling, and BJJ for all levels. Named after its famous Brazilian founder, Renzo Gracie (grandson of Gracie jiu-jitsu founder Carlos), it was created with a special emphasis set around mixed martial arts training. The academy has now evolved into one of the best places on planet earth for no-gi jiu-jitsu with a large part of its success being owed to coach John Danaher.

His innovative and advanced teaching has created a reputation for exciting and effective jiu-jitsu. With a heavy emphasis placed on leg-locking systems, Danaher’s talents have been enlisted by everyone from world champion jiu-jitsu artists to legendary UFC champions such as Georges St-Pierre. Simply put, training here is a must for any no-gi enthusiast.

The school is home to world-renowned BJJ competitors such as Gordon Ryan and Garry Tonon along with a very talented professional team known as the Danaher Death Squad (2). The academy is not only known for its no-gi training but also its gi classes led by several members of the Gracie family such as Robson, Neiman, Rolles & Igor. The facilities and location helping in making this the perfect environment to learn self-defense or make a move towards the competitive circuit – if that’s what you are hoping to do.

Andre Galvao is one of the greatest grapplers in BJJ history with multiple world titles to his name in gi and no-gi. His reputation for being a top-level competitor has helped him to grow a successful school in California, a school that has once again been recently expanded.

Training at ATOS is as high level as it you could ever hope for with many great names such as Keenan Cornelius, JT Torres, and Kaynan Duarte standing as some of the major grappling names that were given their black belts by Galvao. ATOS is famed for its intense training camps leading into major events, which aren’t for the faint-hearted.

Within their ranks are current top-tier talents such as the Brazilian fighters, Ronaldo Junior and Lucas Barbosa, and the American Josh Hinger – who also coaches at the academy. ATOS’ pedigree as a top team in jiu-jitsu is shown by their dominance in team standings and especially at IBJJF worlds where they have multiple titles to their name. By the looks of things, their progress does not appear to be slowing so expect to see their name in and around the top levels for the foreseeable future.

A short walk from the Renzo Gracie Academy in Manhattan, you are going to find another top tier academy with a world-renowned reputation. Marcelo Garcia’s academy has been on most BJJ bucket lists for years now, simply down to Marcelo’s own success on the mats and his submission heavy style. Marcelo has top competitors at the academy like Matheus Diniz who won his division at the 2019 ADCC.

Training is offered for all levels in gi and no-gi with renowned coaches such as Paul Schreiner and previously Bernardo Faria. Marcelo also had one of the first online training subscription services, which to this day remains one of the best for its depth of technical content. Anyone who knows anything about BJJ will tell you exactly how skilled and revered a practitioner Garcia has been over the years and as you would expect, his gym does a good job at living up to that lofty reputation.

California is a hotbed for BJJ training and home to possibly one of the coolest gyms on the planet. Its distinctive white mats and bespoke artwork are recognisable to most jiu-jitsu practitioners. The head instructors are two of the greatest competitors in history, the Mendes brothers, Rafa and Gui. Each man has both won multiple world titles and after a glittering career, are now retired from competition after winning nearly every honour possible.

Their gym has a dedicated kids program and as you would expect, the level of the younger fighters who are breaking through speaks volumes when you watch their readily-available highlight videos. The AOJ kids squad is widely regarded as the best team in youth BJJ, with them regularly topping the team podium at events (3). The adult squad is now beginning to look impressive with a typically Mendes brother style of jiu-jitsu being shown.

Fighters such as Tainan Dalpra are starting to look unstoppable in a similar way to a prime Rafa Mendes during his heyday in the sport. Tainan recently won the 2020 Gi Europeans at brown-belt with an impressive run in which he was rarely troubled and most dominant. AOJ also has a youth program which is similar to a scholarship for talented athletes with the potential to develop into world champions.

What is the best BJJ school?

The best schools are ATOS Brazilian Jiu-Jitsu in San Diego, AOJ in Costa Mesa, Marcelo Garcia Jiu-Jitsu in New York and Renzo Gracie Academy in New York. There are some absolute killers currently coming from these schools.

Lachlan Giles is the head instructor of this martial arts academy in Australia. As the name suggests, the academy offers all aspects of training in muay thai, wrestling, BJJ, and mixed martial arts. There are three different locations to choose from in Australia, however, St Kilda is the gym of Lachlan. In the 2019 ADCC Lachlan showed to be one of the best leg lockers in the game. After losing out in his division he went on to submit three giants in the absolute division – with each all via heel hook to claim a bronze medal (4). The gym’s YouTube channel is regularly updated with technique videos that are free to view and are often filmed in class. These videos can give you a taste of the level of instruction and quality of jiu-jitsu training you will receive. Lachlan is known for his innovative style both in the gi and no-gi and now has a crop of talented athletes creeping through to into the regional competition scene.

Scandinavia is a hotbed of grappling talent with numerous great places to train in Sweden, Denmark, Finland and Norway. The head instructor of the academy is Brazilian, Eduardo ‘Teta’ Rios – who is a 4th-degree BJJ black belt under the famed Ricardo Liborio. ‘Teta’ is a six-time European champion, ADCC veteran, and has competed at Polaris among other major competitions. His history of high-level competition has filtered through into his students and they now boast a large competition squad that seemed destined to begin regularly winning tournaments within Europe. Standout fighters from the gym include black belt Sebastian Broche and brown belt Tarik Hopstock – known for his foot locks and self-named ‘Tarikoplata’ submission (5). It would be difficult to look past this gym as being one of the best training environments in Europe.

Irelands has a thriving jiu-jitsu scene and thanks in part to one of its largest BJJ academies – which has been growing for years. Head instructor Darragh O’Conaill was given the chance as a purple belt to lead his gym back in 2010 when his coach retired through injury. He soon affiliated with Ribeiro Jiu-Jitsu and took regular training trips to San Diego to earn his black belt and further his jiu-jitsu skills. Darragh received his black belt in 2015 and of all of his accomplishments, his biggest win to date was the 2018 European No Gi champion. He regularly competes to this day alongside the members of his growing academy – with everyone from kids & teens through to adults and a talented female squad led by the surging Welsh grappler Ffion Daves. The strong competition-focused training has seen the academy win multiple Irish championships and the first IBJJF Dublin open team title in 2019. Their dominance is clear and they were recognised on the world scene as a key gym when Flo Grappling visited for the 2018 worlds camp (6). Their team of competitors has been developed by Darragh and is seeing their first wave of black belts come through to compete on the European scene. East Coast now has Irish affiliate gyms and in England, and all things considered, they are a true martial art success story.

Hopefully, this guide has proven useful to you in your quest to answer the question ‘are there gyms that teach BJJ near me?’. Overall, diving into the world of Brazilian jiu-jitsu can be one of the most rewarding experiences any person can have so we hope that you can find the perfect fit for you and begin down this long and exciting path.